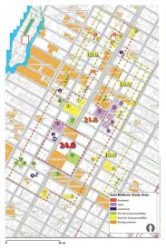 The East Midtown area is a business hub, already containing 60 million square feet of office space. This amendment increases as of right Floor Area Ratios (FARs) for commercial uses from 12.0 to 15.0 to as high as 18.0 to 27.0 in the East Midtown Subdistrict. Such increased FARs can be achieved in various ways including: